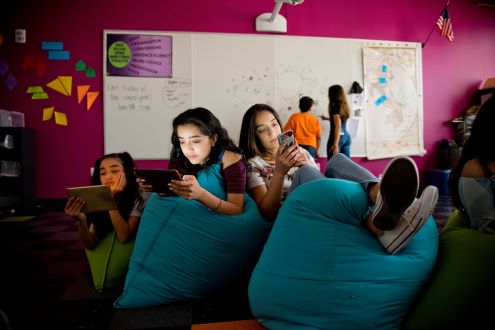 With enrollment rapidly climbing at Gahanna Lincoln High School a decade ago, the Ohio district had no choice but to add a new building to the campus. And that gave Principal Dwight Carter a rare opportunity: to create modern learning spaces for a generation of students growing up in the digital age.

The result was Clark Hall, a nontraditional school with open spaces centered on the learner rather than the lecturer. Soft furniture and flexible seating configurations encourage student collaboration. There’s an abundance of natural light and vibrant colors. And it was built to accommodate technology.

The opening of Clark Hall in 2011 prompted teachers and administrators to reconsider the design of the older part of the school.

As a common area, the library was a natural place to start. The librarian wanted to increase student traffic and also make it a warmer, more welcoming place. She looked at where students sat and how they worked. She created more open spaces and pockets of seating areas accented with colorful rugs.

“It was well received,” Carter said. “The kids enjoyed it and traffic increased dramatically, not just during the school day, but before and after school. It was a welcoming space where the kids wanted to be.”
The library transformation demonstrated that you don’t need a new building to transform learning spaces.

Carter, along with another administrator and the Clark Hall architect, subsequently wrote a book on designing learning spaces called What’s in Your Space? Five Steps for Better School and Classroom Design.

Carter’s experience taught him that designing learning spaces for today’s students requires an understanding of how they are different from past generations. They have grown up with digital devices and social media, which have expanded their social circles. And although they might seem attached to their devices, what they really want is face-to-face interaction, Carter said. They don’t fit into the old classroom model of chalkboard, lectern and rows of desks.

“They’re the Starbucks generation,” he said. “Starbucks is very individualized; you can pick and choose where you want to sit, whether you want to work in groups or individually. There’s background noise or soft music. Or you can listen to your device. There’s a lot of choice there.”

Today’s generation is used to having choice in every area of their lives except when they’re in school, Carter said.

“We want to create a space where they have choice, where they have voice and that is welcoming to them. We know just by experience and also research that if a kid feels welcomed, they're going to be much more engaged and much more involved in academic achievement.”
Translated into physical space, that can mean a classroom where there is no front, different kinds of furniture, and seating arrangements that encourage interaction and collaboration.

Of course, such configurations require teaching styles give students more independence to work on their own and in groups. That’s the other half of the equation. In his book, Carter says “just changing the learning space without changing practices will provide just minimal improvement.”

For those interested in taking steps to update learning spaces, Carter says to start small. Here are some of his suggestions:

Transform one small space of your classroom into a common area.

“If you look at most elementary schools, they implement the concept really well. They have stations, they have carpet squares and different types of seating.” Secondary teachers can do the same thing in a part of a classroom that’s underused. “It could be a couple chairs. It can be one chair. Call it a calming space or a reading space or whatever you want to call it. It takes minimum effort. It’s just a change in mindset. Test it out, talk to the kids and see what works.”

Be mindful of the decor.

One often overlooked area are the walls and what’s on them, Carter said. “If you want to engage the kids, do the images and posters represent the students who are in the classroom?” he said. “The cost is minimal but it can make a big difference in how students feel about the space.”

Make students comfortable where they congregate.

At two high schools where he has been principal, Carter has taken a look at where students gather in the hallways and put furniture there to accommodate them. “We recognized that we wanted the entire school to be a learning space, not just the classrooms,” he said. Hallways can be quiet places when classes are in session.

This type of accommodation is a very easy lift. “You don't have to redesign anything or have a new building,” Carter said. “You don't even have to buy new furniture; just look at what you have in storage. Look at where kids are sitting and put it out there.”

This might seem scary  Just do a pilot and see how it works. If it doesn't work, try another spot. The goal is to make the kids feel more connected and engaged.”

Examine unused or underused space throughout the building.

At New Albany High School where Carter was principal, a community room that was rarely used was transformed into an annex of the cafeteria and a coffeeshop was added. It became a gathering place for students. “It was a huge success,” he said.
“A lot of these things aren't necessarily tech-heavy or all that innovative,” he said. “It just a different approach to increase student engagement. They show that student activity in the classroom can be driven by the type of space that they're in.”

ISTE members interested learning more about transforming learning spaces can register for the ISTE Expert Webinar “5 Steps to Better Classroom and School Design” on Feb. 4. The presenters are Carter and Brian Seymour of the ISTE Learning Spaces Network and ISTE Technology Coordinators Network.

Jerry Fingal is a blogger from Eugene, Oregon, who writes about the intersection of education and technology.

With enrollment rapidly climbing at Gahanna Lincoln High School a decade ago, the Ohio district had no choice but to add a new building to the campus. And that gave Principal Dwight Carter a rare opportunity: to create modern learning spaces for a generation of students growing up in the…

It’s a syndrome seen at so many schools. As school districts face shrinking budgets, some are tempted to find savings by cutting library staff. After all, the reasoning goes, with so many resources available via laptops, tablets or phones, who needs librarians anymore?

We all do, argues…

The new ISTE Standards for Students, released in 2016, were developed to empower student voice and ensure that learning is a student-driven process of exploration, creativity and discovery no matter…