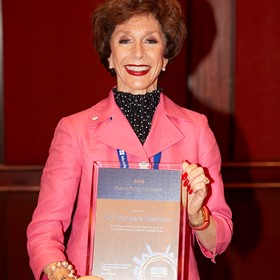 There’s no great secret to being an effective advocate for technology in education, says Barbara Nemko, the longtime Napa County (California) Superintendent of Schools.

“You can’t be an advocate unless you’re passionate about it, too,” she said.

Nemko has been recognized for her efforts in promoting edtech in her own county, and at the state and national levels, as well.

“It’s always nice to be recognized for doing something that you love,” she said. “I’m very excited about the difference that technology makes for kids.”

And now, she says, “I have a new favorite passion.”

That would be a program to promote reading among Napa County’s preschoolers through the use of an online application called Footsteps2Brilliance. The program includes illustrated and animated books in English and Spanish, plus more than 200 alphabet books and education games.

Napa County schools tried out Footsteps2Brilliance with a small pilot program in 2011. Sixteen English learners with no preschool experience enrolled in a four-week camp before kindergarten and were loaned iPads to access the program. In four weeks, comprehension scores increased from 11 percent to 76.4 percent, plus parents became more engaged in their children’s education, the Napa Valley Register reported.

The pilot program was so successful that Nemko expanded it to give every family in the county free access. The program is especially effective among families who are primarily Spanish speakers, as they generally don’t have as much access to books.

“By the time they get to kindergarten, they are on a much more level playing field,” Nemko said.

Objectively, Napa schools have seen statistically significant increases in their Peabody Picture Vocabulary Test, with the greatest gains from English learners, she said.

Subjectively, teachers are excited because their students are so much better prepared and “far more ready to learn than the kids teachers had in years past,” she said. Kids don’t “check out,” physically or mentally, because they’re not falling behind on their first day of school, she added.

“The nice thing about the system is it’s a whole management system,” she said. “I can look at reports and see which students are reading most and whether they’re reading in school, out of school, on evenings or on weekends.”

Nemko, who started her education career teaching at PS 13 in Queens, New York, has been the elected superintendent of schools in Napa County since 1997. She oversees 21,000 students attending 43 schools in five school districts.

She has worked closely with the nonprofit agency NapaLearns, an organization she helped found, to develop a countywide agreement that ensured an internet infrastructure serving every school in the district.

She’s been involved in numerous statewide education initiatives, work recognized in 2013 by ISTE affiliate Computer Using Educators, which gave her a legislative advocacy award. She also was recognized as one of the “Top 40 Innovators in Education” by the Center for Digital Education, a national organization. And she was featured in the December 2013 issue of THE Journal as a tech-leading superintendent sharing best practices.

“I take every opportunity to talk to kids and watch them as they use devices and see how engaged they are,” she said. “You can’t help but be an advocate — it comes naturally.”

Tim Christie is a freelance writer in Eugene, Oregon.

This is an updated version of a post that originally published on Feb. 12, 2015.

Join the ISTE Advocacy Network and find out how you can make your voice heard for edtech!

When someone talks about advocacy, what do you think about? You may imagine ISTE members walking the halls of Congress or writing letters to their state legislators, sharing their values. These activities are important as they connect us to those who make policy and approve funding. We must…

California schools are funded at a per-pupil level that currently places them at somewhere between 46th and 49th out of 50 states. This lack of funding is compounded by the fact that the cost of living in most of California is far above the national average.

In Wisconsin, the goal of the Digital Learning and Technology team is to help our state’s educators leverage digital tools to increase student engagement and outcomes, rather than to develop educators’ capacities to use any one specific device or piece of hardware.